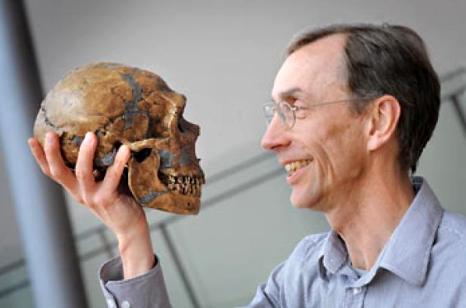 Svante Paabo, face to face with a neanderthal skull. Paabo initially sequenced 4 million base pairs of the neanderthal genome in 2010. In 2013, a full genome was sequenced from the toe bone of a Siberian neanderthal in the Altai Mountains.

El Castillo Cave, located in Cantabria, Spain, is known as the oldest cave art site in the world. It was discovered in 1903 and has since been found to contain parietal art and sequences spanning the Lower Paleolithic to the Bronze Age.

Lack of organic dating material, including lack of organic pigments, means that carbon-14 dating could not be used in determining its age. Instead it has undergone Uranium series dating via the calcite in minuscule stalactites that have formed over its parietal art. In this case, the oldest dates were found over hand motif stencils and disk-sized red ochre dots– two forms of symbolic expression that appear ubiquitously in the history of human cave art, regardless of geographic location, and which I have discussed in posts here, here, and here. The U-series dating, completed by Pike et al., gives the art a minimum age of almost 41,000 years. [1][2]

This short documentary includes more background information and video footage of El Castillo Cave, among 22 other Spanish Paleolithic cave art sites within or near Cantabria.

Lead archaeologist Alistair Pike believes that more recently-taken samples, which have not yet been analyzed, will prove to be even older– and in that case, it would prove very unlikely the human creation of these paintings. This leaves the other option: that Neanderthals were the artists and had comparative cognitive capabilities and/or grasp of symbolic thinking and behavior. Pike’s suspicion is that this is the case. In another recent study, charcoal found next to six paintings of seals in Nerja caves, Malaga, Spain, has been dated to between 42,300 and 43,500 years old. The paintings themselves will be dated in the next year or so, and if the dates match, they will take the title of oldest known paintings. Like Alistair Pike, José Luis Sanchidrián at the University of Cordoba, Spain believes the paintings are more likely to have been painted by Neanderthals than early modern humans.[5]

Likewise, sophisticated Chatelperronian artifacts recovered at the Cave of Grotte du Renne, France in the last 10 years have been found with well-identified Neanderthal remains. Opponents have asserted admixture of contexts and claimed that humans were responsible for the symbolic objects and sophisticated tools– however, recent Carbon-14 dating of the layers by Hublin et al. in 2012 has put this contention to rest and shown the stratigraphy to be intact.[3] These recent findings leave little room to debate the cognitive ability and capability of abstract, symbolic thought that Neanderthals must have possessed in order to produce these items in the first place.

The last holdout of archaeologists against Neanderthal symbolism protest that these “sophisticated” Neanderthal groups must have lifted their ideas from the work of incoming humans. However, even if this were the case, this doesn’t support a lack of Neanderthal capability to produce art and engage in symbolic practice. Clearly, if they were able to replicate sophisticated human “products,” they must have had substantial cognitive capacity and skill in their own right. Otherwise, it wouldn’t have been possible. Were Neanderthals less creative? Perhaps. Were they the apish, stooping, small-brained brutes depicted in history’s early misrepresentations? Clearly not–archaeological evidence throughout the last century has gradually dispelled the myth. The stark differences between dated and modern forensic reconstructions of Neanderthal skulls and bodies are very telling of how attitudes have shifted. However, a curious degree of anti-Neanderthal stubbornness in the literature and still-active vitriol between each theoretical side makes apparent the fact that some bias likely remains.

Neanderthal proponents such as archaeologist João Zilhão cite behaviors proven beyond a doubt to have been performed before human arrival, including burial of the dead, possession and use of ochre and manganese pigments, and sophisticated tool technologies–for example, a specialized birch sap spear construction technique so difficult that even modern experimental archaeologists have trouble replicating it.[4]

Different views of an ancillary metatarsal of horse with an excavation break from Cueva de los Aviones (Left) and binocular microscope close-ups of its pigment-dotted tip (Center and Right).

The photos shown above are of artifacts found at two Neanderthal sites excavated by Zilhão in the last five years. They are located in south-east Spain: the Cueva de los Aviones and the Cueva Antón, both in Murcia and dated to 50,000+ years BP.

Zilhao also makes a fair point: “’You don’t need to have shell beads, you don’t need to have artifacts with graphical representation to have behaviour that can be defined archaeologically as symbolic,’ he says. ‘Burying your dead is symbolic behaviour. Making sophisticated chemical compounds in order to haft your stone tools implies a capacity to think in abstract ways, a capacity to plan ahead, that’s fundamentally similar to ours.'”[4]

And so, the battle continues between staunch supporters and deniers of neanderthal cognitive capability. However, if the most recent U-series dates confirm even older ages for El Castillo’s art, this might just be the smoking gun that pro-Neanderthal archaeologists have been waiting for.

Modern interpretation of a Neanderthal man.

Parietal cave art has been the subject of wonder, fascination, and speculation ever since the first discoveries were made in Western Europe in the late 19th century. It has long been a phenomenon exclusively associated with Western European hunter-gatherer groups living from the Aurignacian period until the end of the Last Glacial Maximum. However, some recent finds in Africa, India, Australia and the Ural Mountains have shown that this type of artistic expression was by no means unique to European groups. Regardless of location, however, almost all of these sites link the spread of artistic creation with the presence of modern humans. One contentious exception is the Spanish site of El Castillo, explored in another post.

(More after the jump…)

END_OF_DOCUMENT_TOKEN_TO_BE_REPLACED

This blog is an informal collection of interesting finds, fun graphics, relevant research, and overviews of sub-topics that I will be exploring formally in more detail in my final paper. As such, the following introduction applies to the aims of both. I don’t think I’ll be able to cover all of these themes, nor in such depth, but will see where it goes.

The general purpose and themes behind this blog, however disjointedly-presented, are severalfold:

I’ll probably come up with more things to think about along the way, but this is a start.